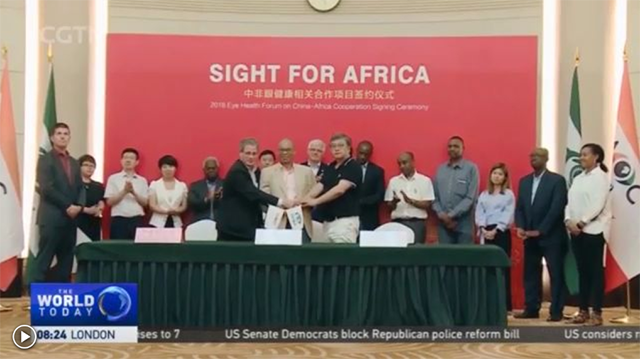 The third China-African Eye Health Forum has been held with the aim of helping African countries improve their eye medical services. Health experts from more than 20 countries took part in the virtual event. Wu Guoxiu has more.

The China-African Eye Health Forum has been held every year since 2018. But this time it's held online due to the COVID-19 pandemic.

The two bodies joined with the World Health Organization in 1999 to launch the "Vision 2020" global initiative. They say achievements have been made in eliminating avoidable blindness, but there's still a long way to go, particularly in Africa.

PETER HOLLAND CEO, Intl. Agency for the Prevention of Blindness "The World Report on Vision says critically eye care needs to be a core part of universal health coverage, needs to be integrated as part of health systems. We see examples China, Iran, but there's a lot more can be done. In Africa crucially, human resources is a real challenge, and that's part of the broader challenge of human resources in health."

Since 2011, Chinese doctors have been conducting free cataract surgeries in Africa under government programs. Experts from the He Eye Hospital based in Northeast China's Shenyang city performed surgeries on 40 patients in Uganda in 2011. A year later, it became the base of China's National Training Center for the Prevention and Treatment of Blindness. The hospital has been using AI technology and big data to help blindness prevention efforts in China's poor areas and hopes to apply the same model in Africa.

HE WEI President He Eye Hospital, He University "The first one human resources building, second one technology transfer, third one model building, how to make sustainable and duplicatable model for Africa."

In a white paper published earlier this month, the Chinese government said the number of visually impaired people aged more than 50 in the country has fallen by more than 700,000 over the last 20 years. But the WHO's World Report on Vision says 1 billion people worldwide are living with vision impairment because they do not get the care they need. Wu Guoxiu, CGTN, Beijing.